On the cobbled stone streets in Europe, you often look down so you don’t trip on uneven stones.  This precaution has an added benefit that you may also spot stumble stones in quiet locations in towns you are visiting. 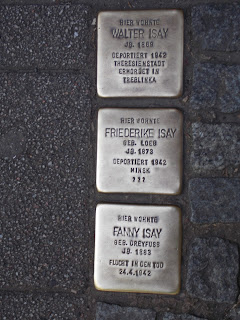 Stolpersteine, the German word for stumbling stones, are in many cities in Europe.  I had never heard of stumble stones but discovered from my contacts in each of the Off the Beaten Track towns I was visiting as the guest of the German tourist office, where I might find them.   And I continued to look for them during my trip.     It is 70 years since the end of WWII but the memorials are a small reminder of the horror of the Nazi extermination program. 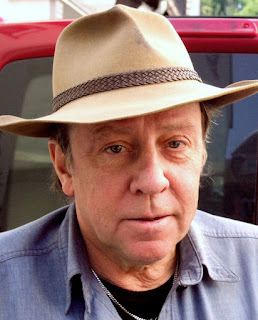 Gunter Demnig, the artist.  Photo from his web site

A little research opened a wealth of information on this quiet testament to men, women and children who were deported by the Nazi during WWII.      The artist responsible for the creation of the Stumble Stones, Gunter Demnig, born in 1947, started this project in 1995 and continues today.  1


The stolperstein project started in the 1990 as an exhibit commemorating the deportation of gypsies in Cologne  and has grown into a movement to memorialize the people who lived and worked at the locations where the stones are placed.  Thanks to Ms Ederer, in charming Regensburg, I found my first stumble stone. 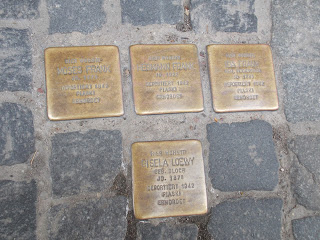 Small, only 4 inches square, these small stones left a big impression on me.      Each stone is topped by a brass plaque engraved with the name, date of birth, date of deportation and if known the date and place of their death.    Stones are installed in the pavement in front of the buildings where the deported person lived or worked.

Everyone I met on this trip had an extensive knowledge of German history.  I was impressed with the endless details and facts each guide could share with me.   From the history of every church and monument to when the Roman Empire built the structures still standing today     I was concerned about any reaction I would receive if I spoke about WWII to the tour guides I met and the very helpful staff at the tourist offices in each city I visited.  WWII only came up when I was informed how the city was damaged or destroyed by the bombings during WWII.    Discovering the stumbling stones offered an opportunity to talk about WWII.

The estimates are that more than 6 million Jews died from the Nazi insanity.  Dissidents, gypsies, homosexuals and ‘defectives’ were also targeted for elimination.   Of course every victim will not receive a stone.    Originally all the stones were created and placed at the designated location by the artist.  Now trained assistants help create the many stones requested each year.3    The artists’ web site lists the installations schedules for across Europe.  .   Each plaque costs about 120E and is paid for by a sponsor, relative or family member.

According to the artist’s website, “As of August, 2014, there have been over 48,000 Stolpersteine (laid) in 18 countries in Europe, making the project the world’s largest memorial”.   Besides Germany, stones have been placed in Austria, Hungary, the Netherlands, Belgium, the Czech Republic, Russia, Croatia, France, Poland, Slovenia, Italy, Norway, Ukraine, Switzerland, Slovakia and Luxembourg.”  1

I have asked a number of well travels associates if they had heard of stumble stones and only one resident in Rome had read about them.      During my trip to Germany, I occasionally spotted one or more installed in front of a building.  They made me stop, read a few names but most important, think.       When you see crowds witness something ‘wrong’ and do nothing to stop it, there is a similarity to what might have happened in the 1930’s as neighbors watched the Gestapo and the SS systematically remove neighbors from their homes and send them ‘away’.   Fear is a powerful tool.  Fear that even a German gentile might also be selected for removal.   The stones bring the sheer massive numbers down to individual victims.

Very faint and blending in with the pavement, but you can read each name and date of their death in the camps

Memorial to the seven martyred priest in Trier

My last stop was Trier, Germany.  Here along with the impressive cathedral, Roman ruins, lively shopping streets my guide showed me the seven stumble stones in front of the Jesuit church.  These stones quietly memorialized seven priests who were sent to the camps and did not return.


Not every town or city is happy to have these memorials added to the public sidewalks.  Some towns have legislated to prevent installation, some stones have been removed or defaced and in some locations the local government has voted not to allow the installation of the stones on public walkways.   Lisa Lampert-Weissig gives an extensive account of the town of Villingen stalwart rejection of stumble stones.   4.     Two Villingen students with the help of their teacher, created virtual stolpersteine sites:  stickers with QR codes that can be read with a smart phone to obtain the same information that a stumble stone would offer.   According to Lampert-Weissig’s story, even these have been defaced.4

Ref:  https://en.wikipedia.org/wiki/List_of_cities_by_country_that_have_stolpersteine   a Wikipedia list of countries where stumble stones can been found.

The professional tour guides I worked with in all the cities Off the Beaten Track  that the tourist board arranged for me were amazing.  But my mission disappointed all of them.  continue to story on the self proclaimed  'Jesus' who leaves messages in Wiesbaden.