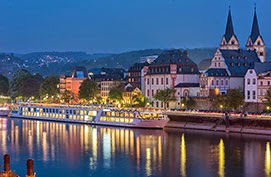 Why I want to go on an eight-day Emerald Waterways river cruise through Europe
I can’t think of any reason why not?

Dreaming of a European river cruise, who doesn’t first think of the Danube river?  And on the  Danube Delights (DD) itinerary, this water highway passes towns and cities older than any in the USA.   For inspiration I am listening to https://www.youtube.com/watch?v=_CTYymbbEL4&feature=kp, The Blue Danube Waltz by Stauress.

An opportunity to sail on the rivers of Europe has been my dream for years.   Sailing on all the routes offered would still
nly scratch the surface of this iconic part of ‘old world’ Europe.
Many of the stops will be new to me, but I travel without a list of must see monument, statues, works of art and no preconceptions.

This adventure will not be what did I see but instead, what new experiences and people will remain in my memory after this adventure.

Each town will be a surprise that I can discover, much like a Russian matryoshka doll.  I hope to experience for the short time I am ashore, some part of life in the towns and cities we visit.    I travel blog full time and every trip is an adventure of new people, new places and lots of history to be written about every night back on the ship.

I always travel with a theme and My Emerald Waterways theme for this adventure is:
Cake, Castles, and Crafts
·  At each stop I hope to visit the oldest bakery to sample the best they have to offer.      Hard work but I am ready for the challenge.  Cities and regions all have their signature sweets.   And everyone is happy when they are eating cake!    A few of the establishments and treats that await me: 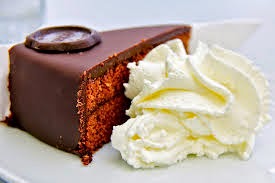 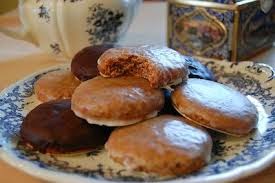 I am gaining weight just researching bakeries for the other stops!    So it is a relief to know there are walking tours planned that shall help me burn those extra calories.
DD offers more walking tours that allow travelers to see life on the same level as the locals    I don’t think you see a country or a town from a bus or train window the same way as when you walk the street, smell the fresh bread baking, chat with a local sitting on a bench in the sun or watch the children playing in the park.

·         Castles:  no need to plan or search for these since CPDD has included many on the daily tours and others shall be easy to find, as well as abbeys and palaces.   Any opportunity to visit some of the 900+ UNESCO World Heritage sites is an added bonus and during this 8 day adventure there are several to be explored..


·         Crafts:   A cleaver term to disguise shopping.  Local markets in each city and small shops owned by locals afford an easy introduction to some of the people who live in each location.    Searching for hand crafted items to remember an incredible trip or a walk through the daily food market is an excellent way to meet and chat and learn about life in that town.    Often you just need to say jo napot, guten morgen, pozdravi or just hello. 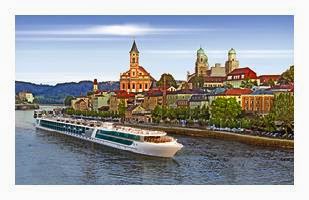 Luxury treatment for 8 days, cake at every town, shopping and the best castles and palaces……what else could I ask for?     The luxury of first class treatment, meals prepared, entertainment daily and even informative lectures shall make it difficult to venture OFF the ship!

If you see me lingering over a cappuccino on the deck one morning, shout out and encourage me to ‘get out there!’

Posted by Lee Laurino at 8:04 PM No comments: Links to this post

Thanks to the Cruise People for another No SOLO SUPPLEMENT news blast!

BY SUSAN MCKEE ON MAY 23, 2014LATEST "SMALL SHIP" NEWS
Solo cruisers looking to enjoy the comfort and privacy of their own stateroom without the added single supplement can now book staterooms or suites on the French-flagged cruise line Compagnie du Ponant.
The expedition line offers close to 30 cruises aboard the line’s three 132-stateroom sister ships, Le Soleal, Le Boreal and L’Austral, with free single supplement.
Staterooms on all three ships are double occupancy or larger, all have ocean views and most have a private balcony. Compagnie du Ponant’s all-inclusive pricing includes all meals, open bar, gratuities, port charges, taxes and fees. Select itineraries also include round-trip air.
Compagnie du Ponant’s free singles supplement cruises are available for booking throughout the season, with new itineraries added annually.
Founded in 1988 by Jean-Emmanuel Sauvée and a dozen merchant navy officers Compagnie du Ponant has four ships flying the French flag that are able to sail in waters inaccessible to larger ships. Le Boréal, L’Austral and Le Soléal each have 132-staterooms and suites and Le Ponant, 32 staterooms. Its fifth luxury yacht, Le Lyrial, begins sailing in spring 2015.
(Photo courtesy of Compagnie du Ponant)
Posted by Lee Laurino at 9:08 AM No comments: Links to this post

Email ThisBlogThis!Share to TwitterShare to FacebookShare to Pinterest
Labels: No solo Supplement

I have been traveling solo to English speaking countries for more than 30 years and the last 10 I have tried to travel and live in Italy with only a basic ability to speak Italian.

Now that i have an opportunity to travel more and perhaps become a true expat, why don't I sell my house and travel?

Today i occurred to me I may be afraid!  I have never thought of this before.

Afraid of not having a home base to return to.
Afraid once I take this step (selling everything I own) I will not have any other excuses NOT to travel.
Afraid of this REALLY being a solo trip.

Are you afraid to travel?
Posted by Lee Laurino at 5:51 PM No comments: Links to this post

Email ThisBlogThis!Share to TwitterShare to FacebookShare to Pinterest
Labels: Afraid to travel, sell everything to travel 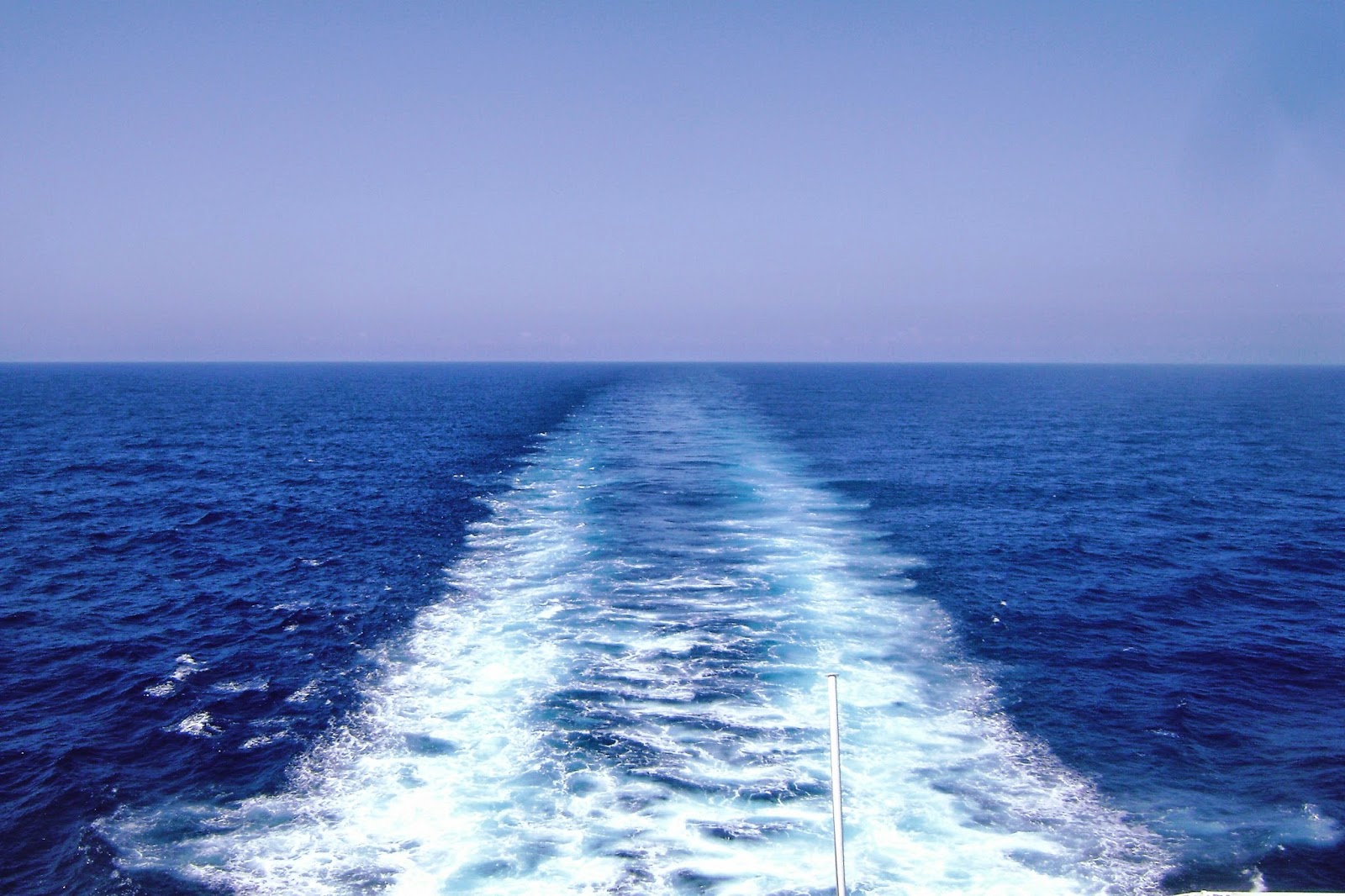 Currently undergoing her first major overhaul in Hamburg since her delivery back in 2010, Cunard cruise ship, Queen Elizabeth, is being fitted with nine new, single cabins.
Though the dimensions and prices for these have not yet been put in the public arena, this represents a very welcome move by the company. While the veteran Queen Elizabeth 2 had a fair number of single cabins, none of her three successors- Queen Mary 2, Queen Victoria and Queen Elizabeth- originally featured any at all.

This article from the West Australian started out describing solo travelers an perhaps unwanted if not also inconvenient, but later lists ships that are offering lower solo supplements...............however many of the companies cater to a luxury market.

I meet wonderful people when I travel solo and yesterday I met Christina Willetts, the owner of Side Street Bakery in Southport, NC 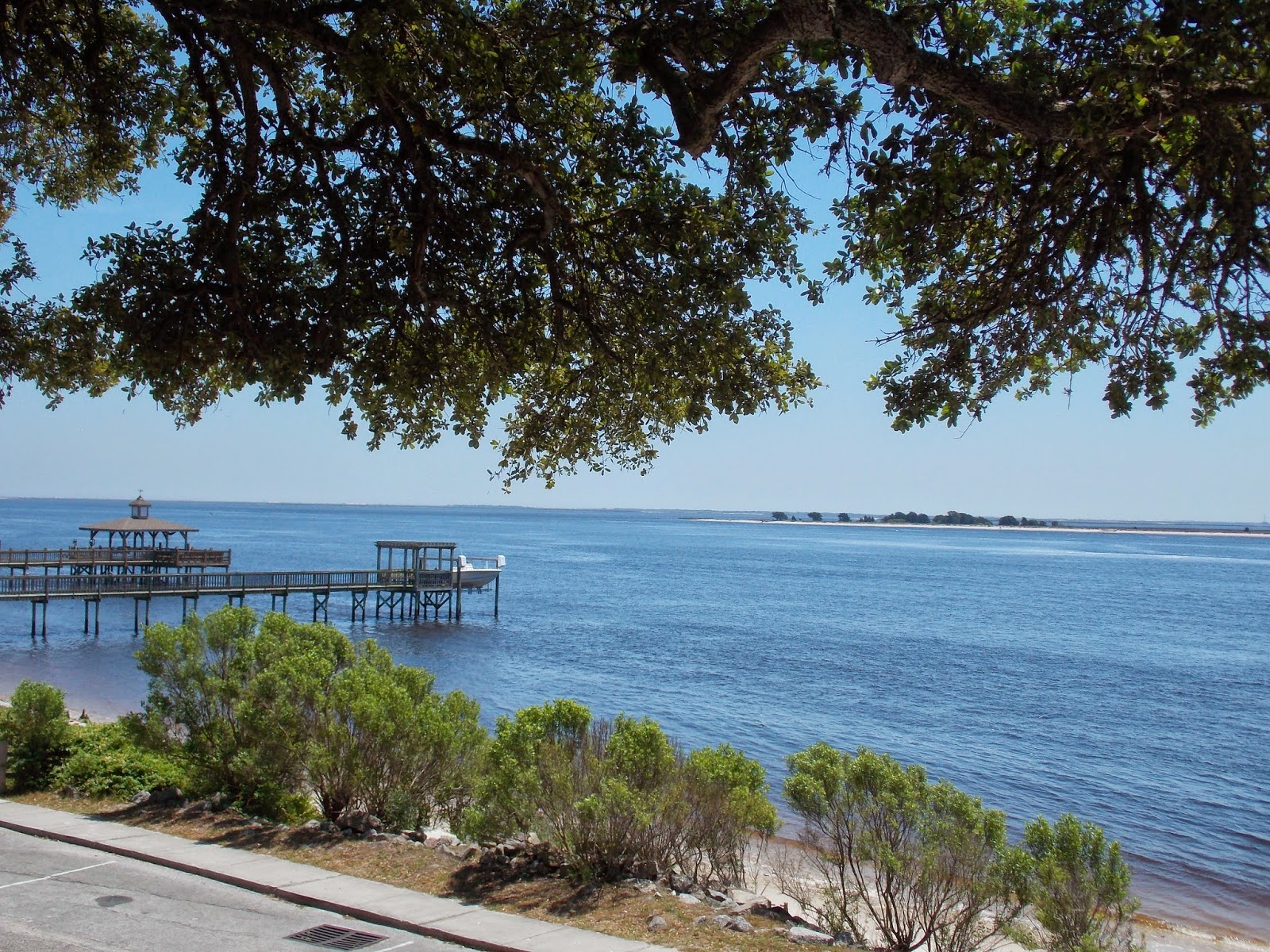 On a day trip to Southport, NC while staying on the coast this month I planned to visit the Wednesday waterfront market and explore the side streets of Southport.

Southport is a charming old town on the Cape Fear river.   It has all the components of ‘a town I want to move to” :  water view, you can walk everywhere, a good town library, planned festivals, events, functions, benches to sit  on and think and lots of free parking!.  http://www.downtownsouthport.org/southport/ 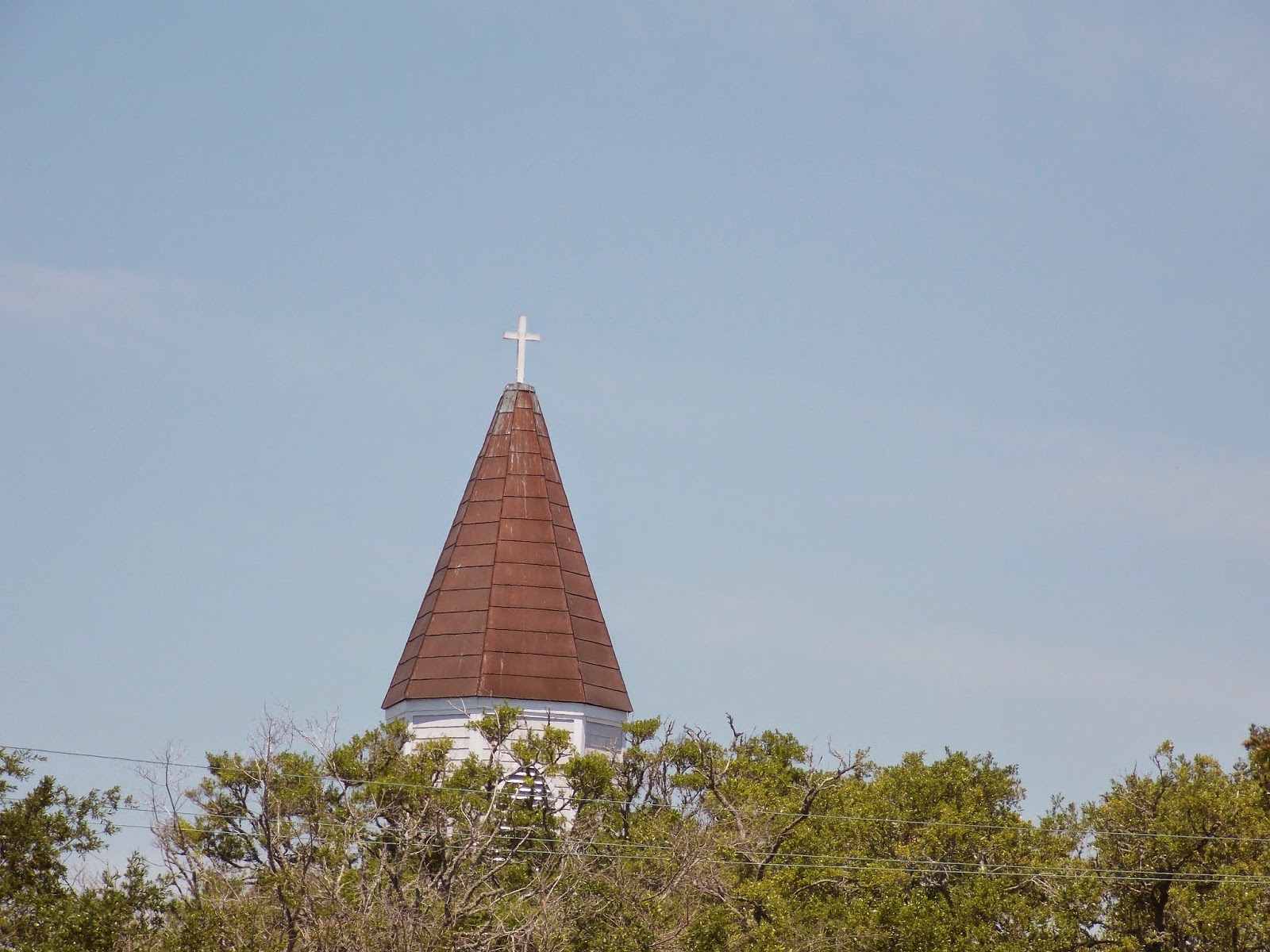 Located about 30 miles south of Wilmington, NC and the same distance to Myrtle beach,  There is also a small car/pedestrian ferry that takes you to  Fort Fisher where you don’t want to miss the  North Carolina Aquarium located right on the beach front.  http://www.ncaquariums.com/fort-fisher.  Bring your bike and spend the day in the sun.

The original brick buildings in downtown are now home to cafes, art stores, antique stores, local artists are showcased in many of the gift and jewelry stores.  There is even a Christmas house.

From the ferry port here you can drive the beach road to the bridge for Wilmington.  This was a great, inexpensive way to sail the river!   I read on the attached link that pets are allowed, pre arranged weddings and  with restrictions, scattering of cremation ashes.   http://www.southporttimes.com/southportferry.html

Southport is a well preserved small town.   The residents were proud to tell me several movies have been filmed here and the current TV show, Under the Dome, is currently being filled in the town.

Today was the beginning of the weekly farmers market in the public park.  More than a fruit and veggie market  there are local artists, crafts people and vendors. 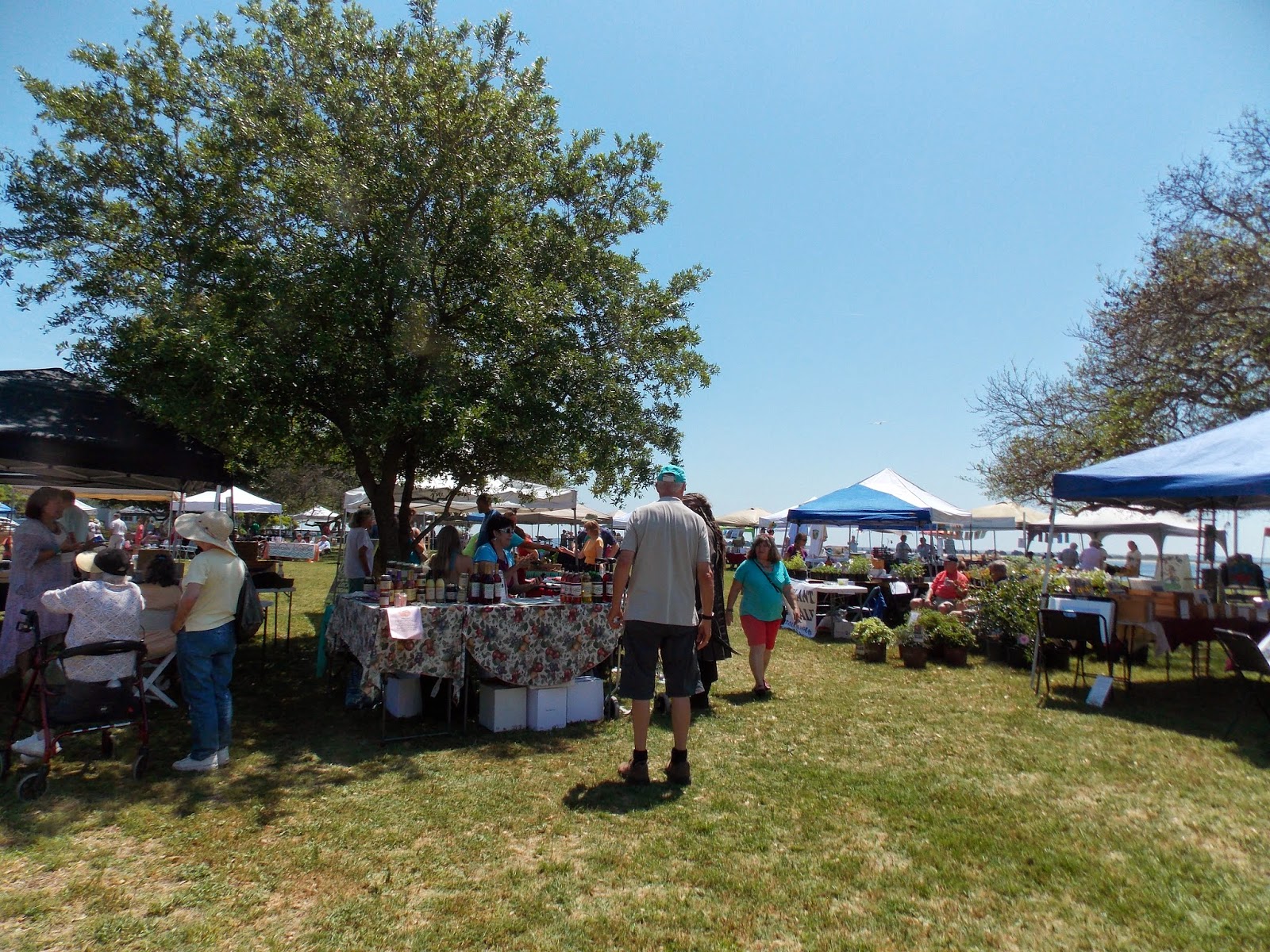 Today I met a woman who grows flowers on a professional farm,  a woman who makes great tote bags from feed bags and tutu happy Ellie DeYoung a creator of happiness, she creates Tutus for all sizes and several other friendly locals who were happy to give me a few moments without the motive to ‘sell’ me something. 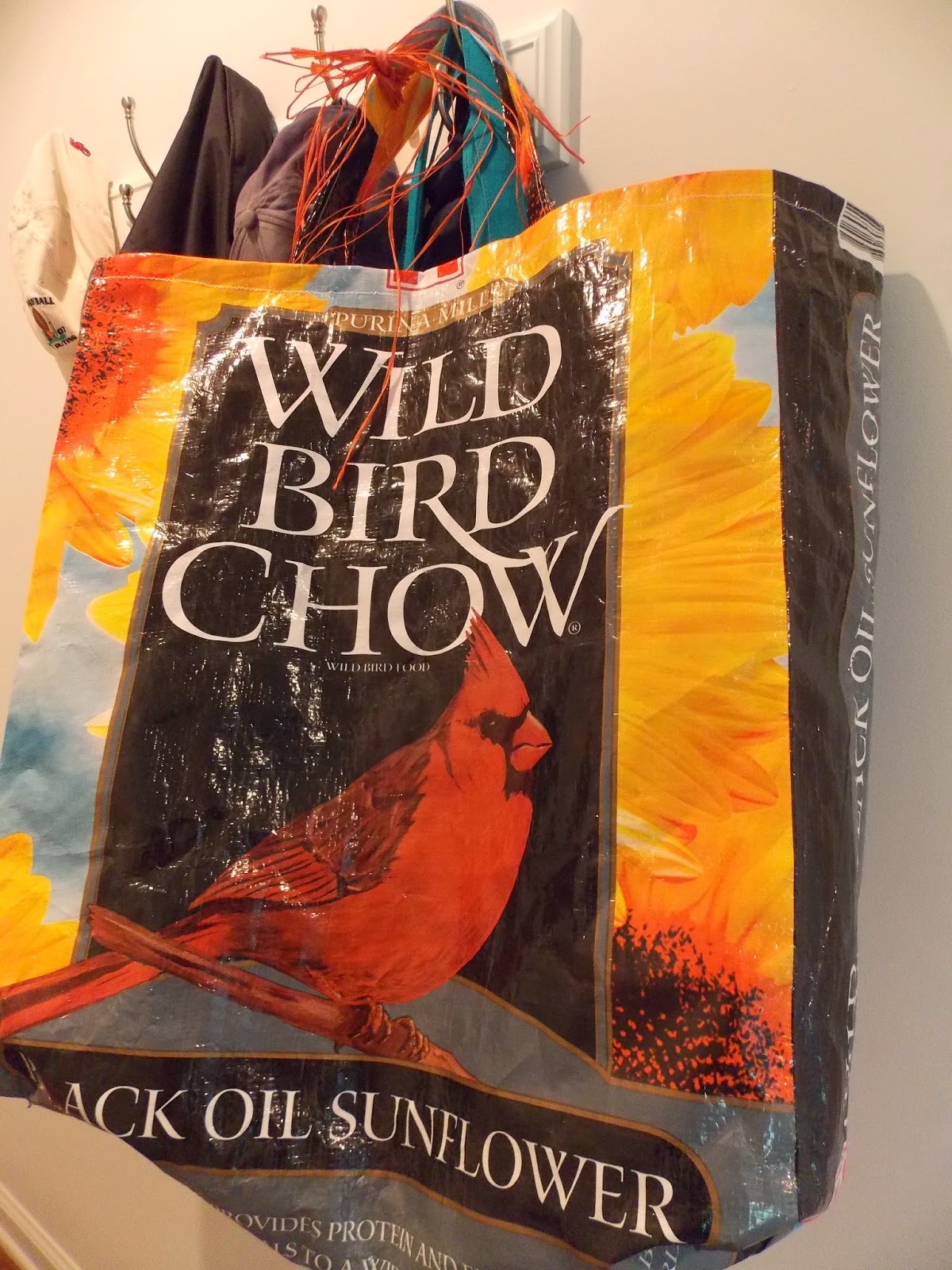 Exploring the shops along the streets near the market i followed the sign for Side Street  Bakery and met  Christina Willetts.  Although she was busy mixing up a new chocolate treat she quickly came out of the kitchen to greet me. 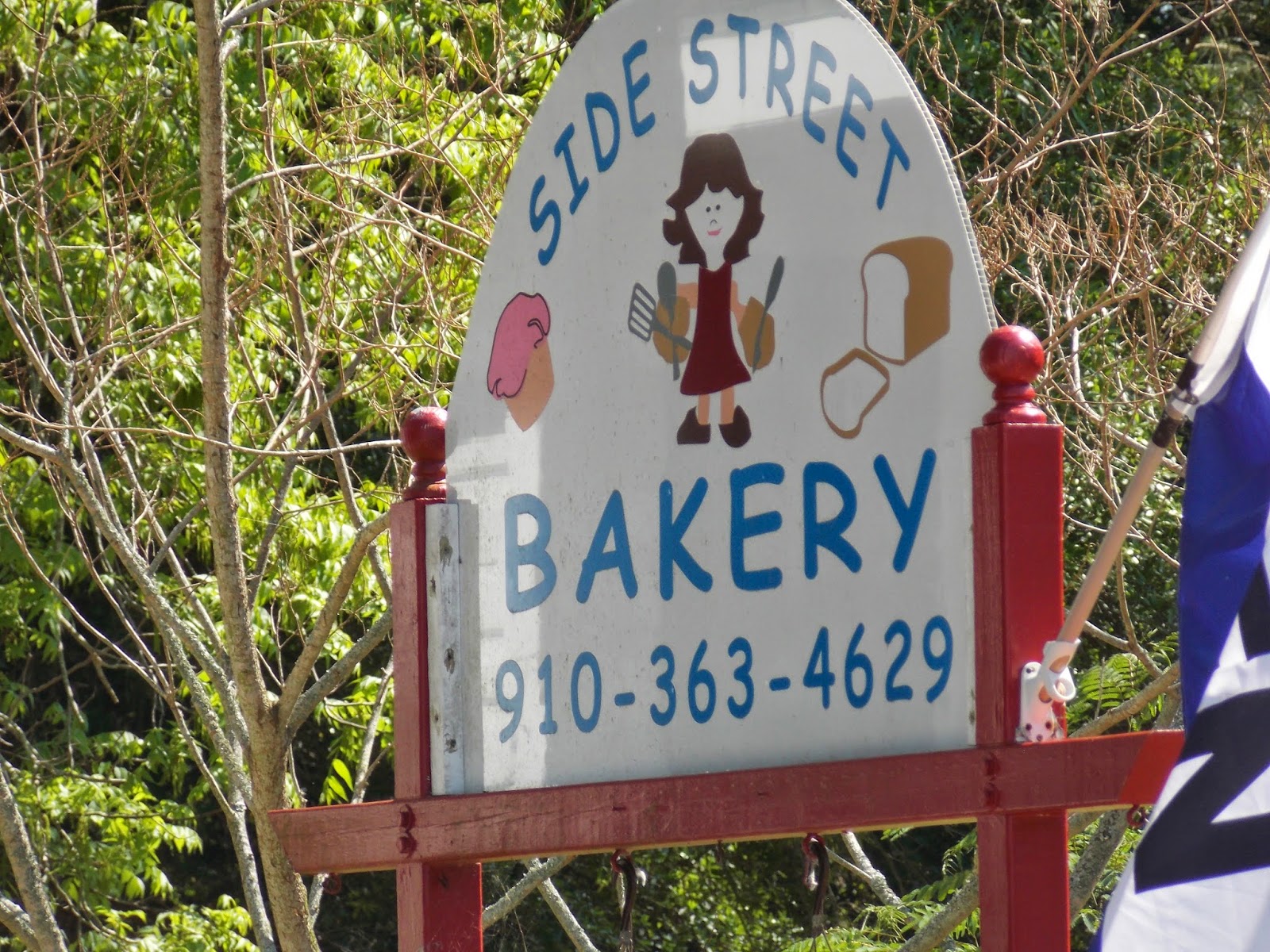 Christina, the owner and baker made me laugh when she told me:  " They will eat dirt if you put Cream Cheese frosting on it!"   And after sampling the frosting, I can understand this.

The small store front did not allow me to view the treats inside but the sign said Pie, Cakes, Cookies, donuts and Breads….so what else could i need?  And I don’t think I have met a bakery I didn’t like!


So many treats to choose from.   Christina  bakes 2 or 3 specialty cakes a day and sells slices of these as well as lemon squares, cookies, donuts, chocolate covered fruit, even on lone canolli!   Fresh bread is baked at night by the ‘bread man’. 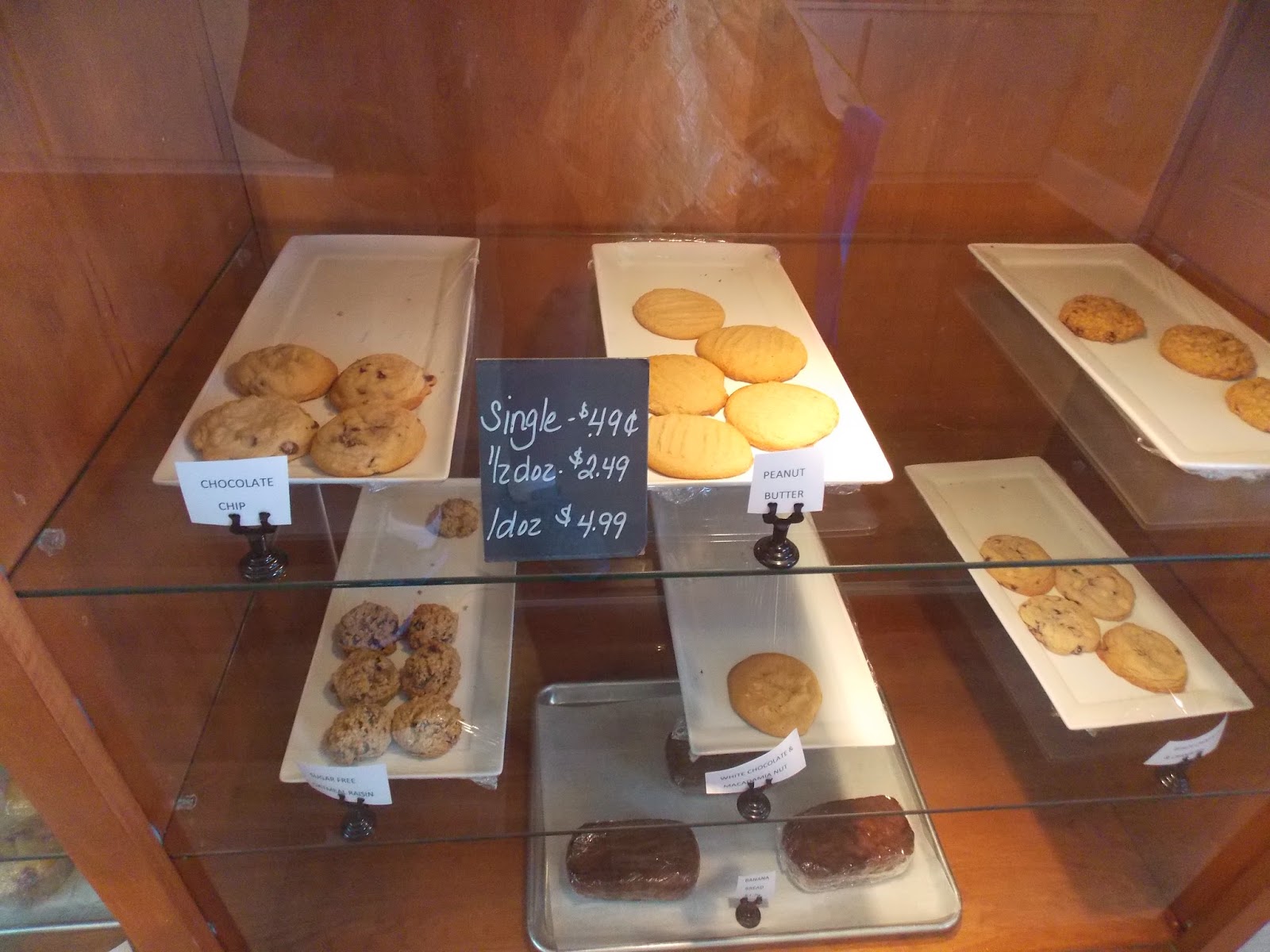 Pies and Cakes
Specialty Cakes and Pies need to be ordered in advance or as the owner told me,  ‘give me 2 hours and I will have a pie ready”.  This was VERY tempting because the pies offered were from old southern recipes and my mouth watered reading the list of black bottom peanut brittle pie, apple cream cheese cake, pecan pie, hummingbird cake, carrot cake, white chocolate Oreo cookie cheesecake, pumpkin cheese cake and on and on.    Christina also creates her own one of a kind offering such as here almond joy cake.    If you have a favorite, just ask her if she can suggest a cake that will make your ‘mouth smile’. 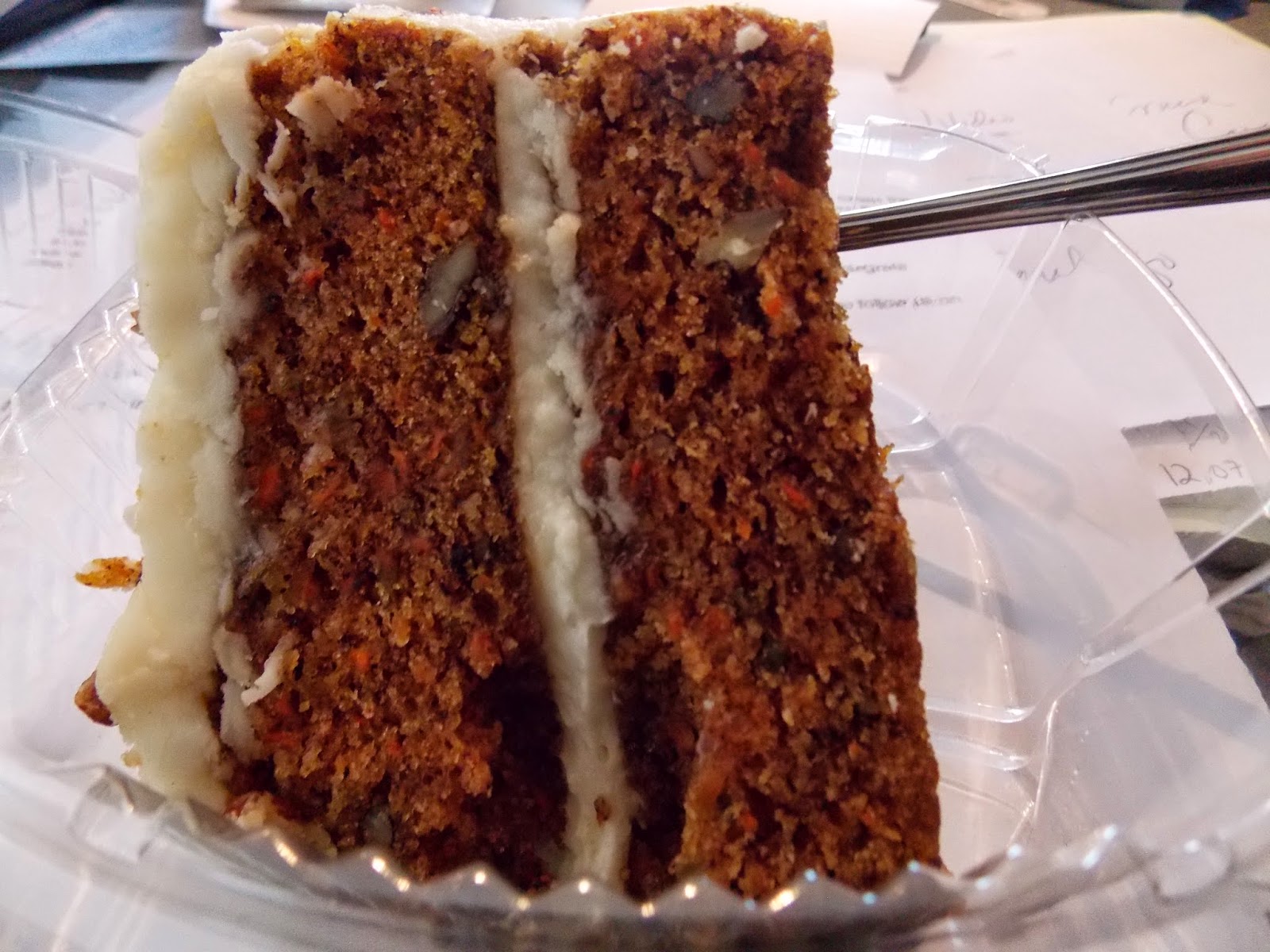 She told me she has “always enjoyed baking”, learning from her mother over the years.    The recipes originate from her mother, grandmother and friends who share others that have been passed down.  The names of each offering remind me of a trip through the deep south:  hummingbird cake,  pear and pecan pie, carrot cake, key lime pie, lemon squares.
Of course I had to take a selection home with me to authenticate the story.


Last year I met another baker in a town close to Dover, England.   She opened a tea room and offered wonderful, traditional English treats.    I will introduce these two creative women…….who knows what can happen?    http://maturesolotravel.blogspot.com/2013/06/high-tea-let-them-eat-cake-at-lavender.html

I returned to Southport in December 2014 and my FIRST stop was the bakery.   Unfortunately Christinia was out delivering a wedding cake but I did meet her Mom and of course tried another cake!  This time it was hummingbird cake.

I sent an EM to the bakery to find out what is in Hummingbird cake:

The hummingbird cake is bananas and pineapple with a hint of cinnamon and of course cream cheese icing.

Has anyone tried this southern treat?  Did your grandma make this too?

Posted by Lee Laurino at 5:31 PM No comments: Links to this post