Woman In the Tower, Münster, Germany: not Rapunzel


Münster, Germany continues the tradition of the Tower Keeper


The Keeper in the tower, is now a WOMAN


This is not the story of Rapunzel from the Brothers Grimm, this is a tradition over the centuries that is still revered and practiced.   I had the opportunity to meet the only woman tower keeper (employed by the City).

During my press trip with Munster Marketing, I was given the opportunity to meet The Tower Keeper Martje Salje.

Spending six nights a week 'watching over the city of Münster'
from the tower of St Lamberti's church struck me as a very unique job, so I was very anxious to meet her. 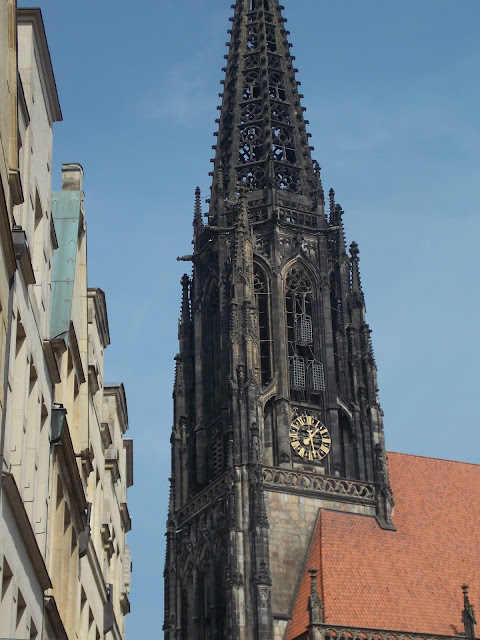 To try to give some perspective of the SIZE of this church and tower, we climbed above the clock! 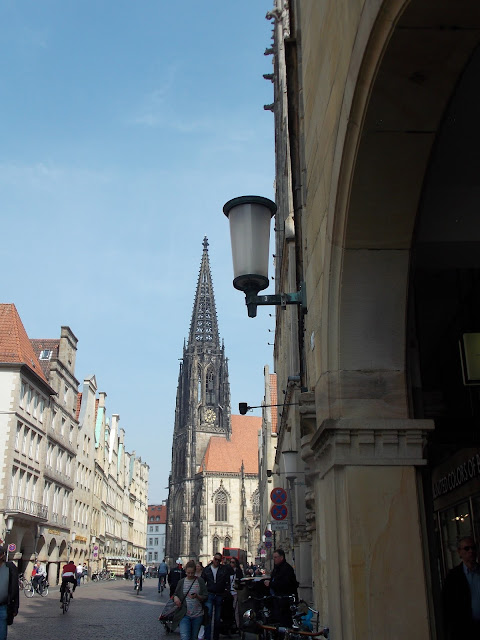 With constant inquiries 'are you OK" from my companions, we climbed all 300 stairs.  When we arrived at the level with the 'cages' I was informed we were NOT at the top, but only 1/2 way! 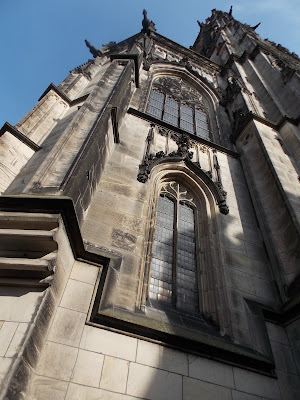 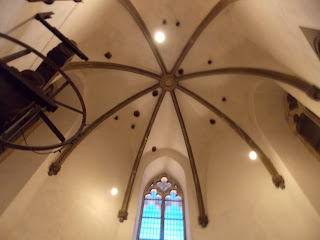 Determined NOT to be the ONLY invited guest to abort this killer climb, we continued.   The stairs are very narrow and as you circle round and round the small stairway, it is easy to become dizzy and disoriented.   However Martje ascended the stairs like a 'gazelle'. And she does this 24 times a week! 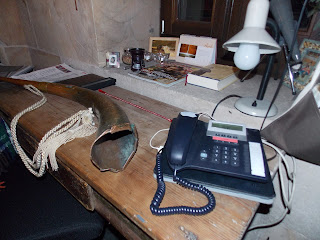 The tower keepers room is larger than I expected.   On the desk is the brass horn that has announce "all is well' over hundreds of years, next to a telephone that is used to call the fire department when the Tower Keeper arrives each night.   Such an anachronism, I had to smile.   There are also several clocks to remind the Keeper each 30 minutes during the 4 hour shift, when the horn must be blown. 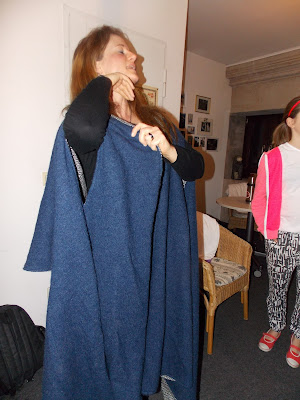 I visited in early April and Northern Germany was just approaching spring so the nights can be cold.
The Tower Keeper has a warm cape with a hood to protect her during the winter and bad weather.

Starting at 8:30 pm The keeper reports to the fire station  that she has arrived safely and every half hour until midnight, the keeper sounds the all is well 'toot', no fires spotted, no invading army approaching.    At 12:30 am she will call the fire station to let them know she has made it back to firm land safely.

Martje, is a part of many decades of history.. 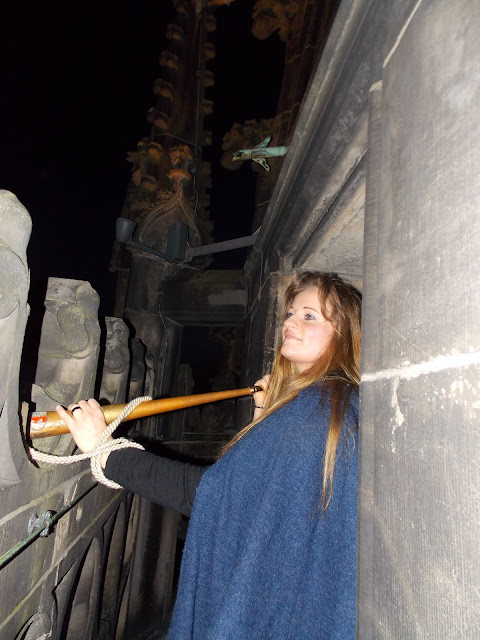 But what does the Keeper do when she is NOT watching for enemies or fire?    Martje, is an accomplished musician, writer and I would add 'historian'.     Drinking hot tea she brought with her (no Starbucks breaks when there are 600 steps to transverse in less than 25 minutes) she shows me her art work, some of the many books she reads and even gives me a sample of her musical work:


At the end of this post you can enjoy the translation to of a lovely song.


The Münster Tower Keeper sent me her understanding on the source of the horn blowing in the tower of St. lamberths;
The following story explains why the signal of the tower keeper rings out every half hour though it used to be heard every hour in former times.
Attention! It might not be suitable for children ;-)
“Once upon a time a newlywed couple, young but poor, went on their honeymoon. They stayed at a rustic Westphalian farm just at the borders of the city of Münster.
The young woman asked at dinner: What are these sounds coming from the city every hour? What do they mean?
And the landlord told her it was the tower keeper of St. Lambert's, tooting his horn to remind the couples who were just married of their conjugal duties. And with these words he gave the young husband a wink.”
“The couple went off to bed early this night.
And the next morning, the husband wanted to know where to find this tower keeper and was sent to Stuhlmacher's (a traditional inn near St. Lambert's church).
There he beseeched the tower keeper to please blow his horn every three or four hours only and promised him 20 thalers.  The tower keeper shook his head and said: Well, a young damsel already gave me 40 thalers and wanted me to toot every half hour, I'm sorry mate!”
The rest is up to you and your fantasy imagination!
But these facts are for real: The signal means
a) the tower keeper is really up there in the tower and awake;
b) that there are nor fires, no foes;
c) or if there were: ALARM! (very rapid tooting sounds);
d) it tells the time (e.g. 3x3 at 9 p.m.)...

Q&A  An Interview with the Tower Keeper

1..  How did you hear about the Tower Keeper position?
Martje:  I read about the job offer online, as they were looking throughout Germany for a new tower keeper (for Munster)

2.  Why did you consider applying for this job?
Martje:   I had finished my studies (history and musicology) and wanted to work in a town like Munster, Westphalia,  (a town) steeped in history.

3.  What questions did the application ask?  Did the application ask if you were male or female?
Martje:  the most important question was whether I like being alone a few hours every evening and wouldn't mind climbing up the 300 steps even on weekends and official holiday(s).  And the new tower keeper would have to know all about the vivid ancient and recent time of the city.

4.  What was the interview like?
Martje:  There were two interviews, the people of Munster Marketing and the municipal leaders wanted to make sure the new tower keeper really was a trust-worthy individual and would stay for more than a few months.  I want to be tower keeper the next hundred years or so, and I really love this city.

5.    Was there a test to see if you could climb 300 steps and blow the horn?
Martje:  Climbing test- yes indeed!  But the horn is only to be played by the tower keeper on duty....

On September 13th, 2015 the Tower Keeper will be called  to ring the church bell :"Rats- und Brandglocke“ (Rat = municipal affairs, Brand = fire and emergency - in medieval times, Glocke = bell).in the tower when the major of Munster is elected.

The contract for the tower keeper is for life or until the keeper can no longer climb the tower.  Martje jogs every morning and works to stay healthy,   She tells me she plans to be the keeper until she is '100' and it would not surprise me if she continues for many years.

Thank you to Munster Marketing and my patient host for showing me how wonderful secrets of  Munster.  My goal was to find solo friendly places to explore off the beaten path in Munster and I concluded this was a very solo friendly town that I plan to visit again.

And the 300 steps to the the Keeper's room was NOT the top:   you still had a staircase and a pull down ladder!  Of course I took the challenge,  Did I mention I don't like heights?


You can read The Tower Keepers blog and visit her website:

The tower is not open for tours.  Journalists, photographers and guests of the Mayor may apply for permission to visit with the Münster Marketing

The city offers tours with city guides K3, StattReisen or StadtLupe, to learn about the city and hear the Tower Keeper blowing her horn.   Looking up they will see the Keeper waving!

"Here are the lyrics to that song I sing every evening up here"...

Greetings from the Tower of St. Lambert’s! Martje

Tower keeper’s Evensong (or religious lullaby)
I departed the world
and am standing on the tower,
I can reach the stars
and talk to the storm.
I ban all ghosts
and live far from derision,
the wind knocks on my window
and speaks of God the righteous.
I see dusk is falling,
the earth exhales,
the city drapes itself in silence,
all people are going home.
I hear silent lamentations
down by the houses,
prayers and curses
from a dark mouth.


I was the guest of  Münster Marketing for my visit to the Tower.   I thank them for the opportunity to meet the Tower Keeper.  All my personal opinions and photos above are my own.  © lee laurino


Additional information from the Tower Keeper:

All the other tower keepers, whether they are female or male, are in another kind of employment.
Blanca Knodel (that’s my colleague in Bad Wimpfen, Baden-Wuerttemberg) lives on the tower and raised her children there.
She tells tourists all about the „blue tower“ and gets a percentage of the door money. She also owns some flats which she rents out.

I am the only female tower keeper in Europe that is working for the CITY - public/civil service and lives on the city government’s salary! The only others working for the city government too are 5 men in Bavaria (in a little town called Noerdlingen). But they have tourists on the tower, too, and they sell postcards and stuff, and the don’t blow a horn but they call „So, G’sell, so“ which has a long long long history and tradition of its own.

My blowing the horn (the art of tooting) is something special and only heard and seen in Muenster, Westphalia

Different towers, different customs…
The tower keeper in Hamburg (northern Germany) is a Catholic, working for the Protestant church (St. Michaelis), he plays the trumpet (chorale/hymns),

And the tower keeper of Luebben (Lübben, Brandenburg, southern Germany) is female, too, but she’s actually a tourist guide showing her city to travelers and even taking them up a (or some?) tower(s?).

The tower keeper of Krakau (Cracow, Poland) is a firefighter (!), also playing the trumpet.
Posted by Lee Laurino at 12:23 AM